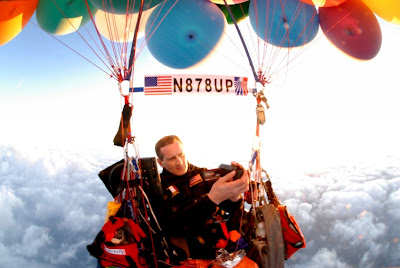 Thirty eight year old cluster balloonist Jonathan Trappe has plans to ‘fly’ 2,500 miles across the Atlantic in the middle of the next year; he will attempt the crossing in a seven-foot lifeboat carried by 365 helium balloons. The gondola-flight will take off from Maine, USA, and head for France- although Jonathan could eventually land anywhere ‘between Norway to North Africa,’ depending on winds.

Unlike traditional hot air balloonists, cluster balloonists use a series of helium inflated rubber balloons attached to a harness to stay aloft. Altitude is controlled by deflating individual balloons or jettisoning ‘ballast’- which may include bottled water, or sandbags- even food.

FAA licenced pilot Jonathan became the first cluster-balloonist to fly across the English Channel in 2010, departing from Challock, England and landing safely in a farmer's cabbage patch not far from Dunkirk, France. Two years earlier, Jonathan had climbed to an altitude of almost fifteen thousand feet in an ordinary office chair attached to a cluster of balloons. The four hour and fifty mile flight, dubbed ‘Chairway to Heaven,’ reignited his passion for ballooning. He says he wants to make the Atlantic crossing- that, according to UK’s Telegraph, has seen five men die attempting- because "One day we can look back and say: 'Humankind were able to pull this off. They did it.'"

A North Carolina, USA resident, Jonathan’s unique gondola will have an open roof covered with a canopy to protect him from frostbite and winds; it will also be equipped with oxygen that Jonathan will need at higher altitudes. In case he has to ditch into the ocean, Jonathan will change out of his UV protection suit and wear an immersion suit instead, ‘deballast’ sand or deflate balloons and land in the ocean, where the lifeboat will keep him afloat. “I'll be equipped with more food and water than I need so I can discard them too," he says.

Jonathan is taking lessons in lifeboat sailing to cover the eventuality that he will have to ditch at sea. He is also trying to raise $300,000 online- besides putting in $170,000 of his own money- to make his adventure a success. He may ascend to as high as 25,000ft during the transit, which would beat his previous world altitude record of 21,600ft. He will also have to fly ten times the distance of another of his world records to succeed in the Atlantic crossing.

Jonathan, who already holds records for crossing the Alps and flying the most cluster balloons, says, "I didn't wake up one day and think: 'I'm going to fly across the Atlantic. Every attempt before this was geared towards this flight. I've been training for a long time."
Posted by manu at 11:02