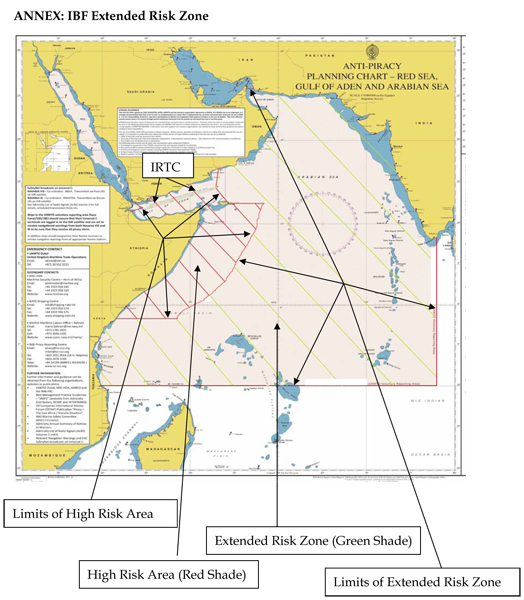 With pirate attacks escalating and becoming more violent in a broad swath of the Indian Ocean and the Arabian Sea, the Joint Negotiating Group (JNG) and the International Transport Workers Federation (ITF) agreed at a London meeting two days ago to revise the International Bargaining Forum (IBF) High Risk Areas (HRA) in the Gulf of Aden and Indian Ocean.


ITF agreements apply to Flags of Convenience and normally set out terms and conditions of seafarer employment. The ITF has earlier declared that it believes that ships should only transit the Gulf of Aden and the coast of Somalia in exceptional circumstances. The risk of attack is now so great, the organisation said, ‘that putting seafarers in harm’s way amounts to a breach of the shipowner’s duty of care’.

The application of the new Extended Risk Zone, which covers almost the entire Arabian Sea (see map) and a large part of the Indian Ocean, will commence from April 1. Vessels will have to provide increased security measures within this zone that will be above the latest Best Management Practice levels promulgated. These may include- depending on the vessel’s size, speed, freeboard and other factors- provisions of personnel or systems to reduce the vulnerability of the ship during HRA transit. The adoption of the Best Management Practices will be a minimum standard of protection under the IBF, it was confirmed at the meeting.

As before, seafarers shall still be entitled to compensation amounting to 100% of their basic wages during any HRA transit, with double compensation in case of death or disability. In case vessels plan to transit the IBF High Risk Area outside of the east bound and west bound lanes created under the International Recommended Transit Corridor, seafarers have the right to refuse to proceed with the passage and will be repatriated at the company’s cost. “This entitlement shall only apply in respect of vessels which are bound to enter the IBF High Risk Area, and will not apply in case of crossing the rest of the Extended Risk Zone”, says the IBF agreement.

Outside the High Risk Area, each seafarer shall be entitled to a bonus equal to 100% of the basic wage and a doubled compensation in case of injury or death on any day during which the vessel he serving on is attacked, provided the report of the attack has been made to international authorities like the UKMTO and proper log entries made. The IBF agreement defines ‘attack’ as ‘any unauthorised and obvious action taken by a third party in a wilful attempt to board or damage the vessel or to harm the crew which leads to the activation of the relevant vessel contingency plans including the alerting of the whole crew’.

No compensation will be payable when ships are alongside, at anchor, or tied up to SBMs, except in Somali ports.
.