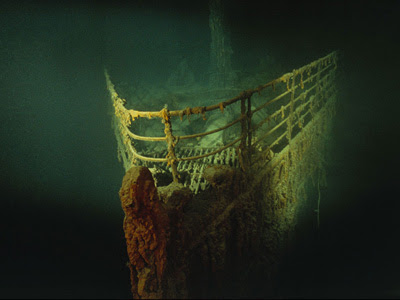 The bow of the Titanic at rest on the bottom of the North Atlantic, about 400 miles southeast of Newfoundland. pic AP
In a challenging deep-sea expedition to the floor of the Atlantic, a “dream team” of scientists, maritime archaeologists and oceanographers will virtually raise the Titanic by making the first detailed 3D map of the famous wreck. A three-week mission will see the team probing a three square mile area two and a half miles beneath the ocean using modern submersible robots, advanced imaging equipment and high definition cameras; the first such attempt since the Titanic wreck discovery in 1985.


The expedition, organised by RMS Titanic Inc, which has exclusive salvage rights to the wreck, will leave St. John's, Newfoundland on Aug. 18 in partnership with the Woods Hole Oceanographic Institution in Massachusetts. The organisers say that they will not collect any artefacts out of the hundreds of thousands scattered on the ocean floor, but will instead build an interactive "video map" of the wreck that will be available to the public online. "We are raising the Titanic in a virtual sense. The pay-off is to let people explore and experience the Titanic on their own," said David Gallo, Director of special projects at the Woods Hole Oceanographic Institution, Massachusetts. "It's also to gain information of archaeological importance from maybe hundreds of thousands of artefacts on the seabed. Every one is a bit of evidence of how the ship sank."

Scientists will also try to determine how quickly the Titanic is disintegrating. Many areas have already crumbled, and erosion is feared to have affected significant parts of the wreck. The 30-person expedition crew will use forensics technology to assess damage to the bow and the stern areas, which separated and sank a third of a mile apart; the mission is being billed as “the most advanced scientific mission to the Titanic” by many observers. Says Gallo, "For the first time, we're really going to treat it as an archaeological site with two things in mind. One is to preserve the legacy of the ship by enhancing the story of the Titanic itself. The second part is to really understand what the state of the ship is."

Experts say that the Titanic wreck has been subjected to ‘fierce deep-ocean currents, salt water and intense pressure’ that will make the expedition’s job even more challenging; in addition, the artefacts are scattered and are lying in nearly a century’s worth of sediment. Gallo is well aware of this. "We're actually treating it like a crime scene," he told reporters.

The lead vessel, the RV Jean Charcot will control three submersibles and the latest sonar, acoustic and filming technology. Images will be compared to the original ones taken 25 years ago, when the wreck was first discovered, to measure the effects of erosion.

"Never before have we had the scientific and technological means to discover so much of an expedition to Titanic," said P.H. Nargeolet, the veteran diver with more than 30 dives to the Titanic to his credit. "We're going to see things we haven't seen before. Technology has really evolved in the last 25 years."

RMS Titanic’s last expedition to the site was in 2004, after which it has been conducting travelling displays of the Titanic artefacts, which they say have been viewed by “tens of millions of people worldwide”.
.

Email ThisBlogThis!Share to TwitterShare to FacebookShare to Pinterest
Labels: titanic