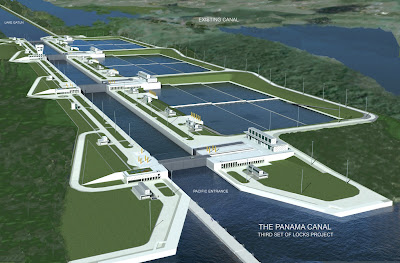 The expansion of the Panama Canal is just half complete, but the expected windfall in trading volumes has already spurred billions of dollars of investment in port expansion and associated projects in the US and elsewhere, reports say, as businesses resize to accommodate the much larger ships that will pass through the Canal. Analysts say that the opening, post expansion, of the Panama Canal will be a game changer for maritime trade and the industry.

One of the biggest construction projects in the world, The Third Set of Locks Project will double the capacity of the Panama Canal by 2014 simply by allowing much larger ships to transit. The planning, that started in 2006 after a referendum in Panama overwhelmingly voted for the expansion of the Canal, will result, when the project is completed, in a new set of locks being constructed and a new lane of traffic opened. Two sets of lock complexes at either end of the Canal and the widening or deepening of existing navigational channels are on the cards. Panama expects a windfall in tolls after spending a staggering $5.25 billion or so on the expansion.

Shipping experts say that the Panama Canal expansion will revolutionise traffic between the East and West coasts of North America and give a new meaning to the term economies of scale, and will result in a major boost to the economies of those countries that are prepared, logistically and otherwise, to handle many of the mammoth ships of tomorrow.

“A deeper, wider Panama Canal with its two new flights of triple locks will double existing canal capacity and allow transit for vessels with three times the cargo when the upgraded passageway opens for business in early 2015,” says a report in the Washington Post. “So important is the race to be ready for the more voluminous ships that the Port Authority of New York and New Jersey is spending $1 billion to raise the Bayonne Bridge to let the taller vessels pass through.” It adds that US ports may spend up to $8 billion a year to modernise.

It is not just port infrastructure that is being revamped. With the demand for double stacked trains set to spike in the US, in the pipeline are projects such as a $90 million rail transfer facility at Baltimore. Also on the anvil, a $180 million dredging project at Miami. Outside the US, countries in South America are racing against time to modernise their ports to be able to service the new, larger ships. Amongst them are the Jamaica, Brazil, Colombia, Chile and Peru.

The exact outcome and the flow of supply chains are difficult to predict, as nobody is sure how things will pan out. "This is going to take several years to sort out as the shipping industry experiments with new routes and hubs, but it is a very big deal, and there will be some winners and losers," says consultant economist Paul Bingham. Many ports in the region, however, are going full steam ahead, expecting a significant increase in bulk fertilizer, grain and containerised cargoes. No doubt ripples will be felt across the world if trade readjusts.

“Experts stress that the global shipping industry seeks a ruthless, penny-pinching efficiency, and routes and cargo flows will evolve,” concludes the Washington Post, referring to shipping in the post-Canal expansion era.
.