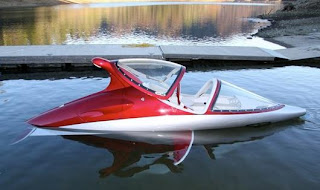 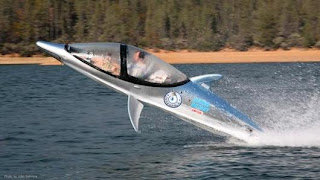 Mumbai October 12 Innespace, a California based watercraft design company, has finally rolled out its astonishing dolphin like submersible vessel into the commercial marketplace. By forking out USD $50,000 and upwards, you can now own a boat that will dive, roll and jump at speeds that make you dizzy.


Their two seater Seabreacher J, the latest model, cruises at 40mph and hits underwater speeds of 20mph while the passengers sit in a sealed cockpit. It can dive, albeit for short periods, to five feet, although it often requires to stay just below the water surface with a snorkel sticking out above the water. Safety features ensure that you cannot go too deep; the engine cuts out and the boat pops up to the water surface. Of course, you can use it like a normal boat, keep the cockpit canopy open, and zip along at 40kmph on the water.


Other safety devices include a pneumatically watertight cockpit and engine space, kept dry with the smart use of inflatable pneumatic aircraft seals. Even if water enters, three robust bilge pumps can automatically pump these spaces out. The Seabreacher, in addition, has an impact resistant monocoque structure, a collapsible nose section in the event of frontal impact, breakaway wing tips and an onboard fire extinguisher.


Rob Innes and Dan Piazza founded Innespace Productions in 1997. The company began as a design and development company specialising in high performance submersible watercraft. Their first prototype, ‘The Dolphin’ (also the Sweet Virgin Angel) remains a research and development platform for the new Seabreacher. Says Rob Innes today, “After over ten years of prototyping, we have really developed a design that is very intuitive to drive, safe, and easy to service.”


The basic model of the custom built Seabreacher will set you back USD$48,000. With a tinted canopy, advanced instrumentation including a mounted underwater video camera, customised upholstery and underwater viewports, the price could go up to as much as $68,000. Shipping costs are extra, at $3,000 to $6,000 per boat. The Seabreacher can be operated in either fresh or salt water, and be launched from a conventional boat ramp using a trailer.


Innespace claims that the Seabreacher J combines the thrill of flying a submersible watercraft with the practicality and dependability of a conventional personal watercraft. After watching the videos of this amazing craft in the water, we would have to agree.

The Seabreacher J incorporates a jet drive for increased safety and better surface performance. The J model is approved for recreational use by the US Coastguard and is able to be registered as a conventional powerboat in most countries. It is powered by a Rotax engine which is available in 155hp or 215hp supercharged variants.

Email ThisBlogThis!Share to TwitterShare to FacebookShare to Pinterest
Labels: Seabreacher