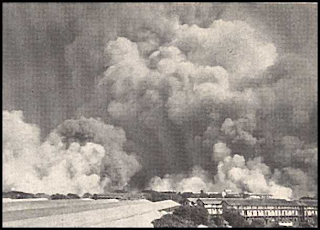 Two gold bars have been recovered from amidst three tonnes of garbage by port labourers in the city. Part of the cargo aboard the SS Fort Stikine, they are undoubtedly part of a consignment of gold that rained down on Mumbai on April 14, 1944 as the ship- also carrying explosives and munitions- caught fire and exploded in Victoria Docks almost seventy years ago, devastating the port and strewing metal pieces and gold in South Mumbai: part of a propeller landed in St Xavier’s School at Dhobi Talao almost three kilometers away.


Jaisu Shipping’s dredger Sulawesi II, working on the Offshore Container Terminal Project, had dropped their load of sand-silt into the port dumping ground; its workers were cleaning the hopper, according to a report in the Mumbai Mirror, when they noticed two shiny pieces of some metal stuck within. Amazed to discover that these were gold bars, they informed the dredger Master, who contacted the managers. Port officials and police were then informed. On closer examination and realising that the Stikine had sunk in the same location, the mystery became clear. "It has been confirmed that gold dates back to the time when SS Fort Stikine was destroyed in an explosion near Victoria dock," DCP (Port Zone), Quaisar Khalid said.

Presently kept at the Yellow Gate Police Station, the gold bars will be sent to the Mumbai Collector who will decide their ownership; similar gold bars found in the seventies have been returned to the British Government. This time, careful dredging of the area was carried out but no more gold has been found. Officials say that the two bars discovered could have very easily been lost in the silt; they were fortuitously stuck in the hopper.

Back in 1944, the gold on board the 7142 GRT Fort Stikine was valued at anything between one and two million Pounds. The ship was carrying cotton bales, oil, explosives and ammunition when a hold caught fire in the docks, possibly due to a cigarette smoked against rules and good sense. The ship was abandoned after attempts to put out the fire failed. She exploded a quarter of an hour later to devastating effect. A second explosion within half an hour added to the destruction: a two square mile area around the ship was set ablaze and official figure say that 740 people were killed and 1800 injured; the actual toll is said to be much higher. Twenty seven ships in Mumbai port were sunk. The resultant tidal wave from the second explosion is said to have lifted the 5000 tonne Jala Panda sixty feet in the air before it dropped on the dock. It rained gold bars, chunks of metal and pieces of debris for up to three kilometers around the port. Windows were shattered twelve miles away.

The fire raged for three days before it was brought under control. It took ten thousand men six months to clear the debris, believed to weigh between half a million and a million tonnes, and get the port working normally again.

The two gold bars found this month come from that cataclysmic provenance- a piece of maritime history largely unknown and forgotten. A city museum is the most appropriate place for them, I think.
.