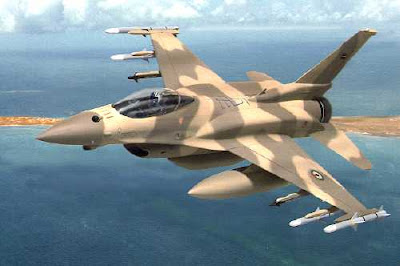 In a bizarre incident last month, the Danish Navy Operational Command scrambled a F 16 fighter plane to make contact with a ship whose Captain was so drunk that he had left the bridge to go to sleep. Many of the rest of the crew do not appear to have been in much better shape, judging from reports.
The  Sœværnets Operative Kommando (SOK) had tried for six hours to contact the 2630 DWT cargo vessel "Ranafjord" that had sailed out of the port of Riga in the Kattegat after they noticed she was maintaining an abnormal course over several hours and was at risk of grounding. A vessel -the “Nymfe”- was sent out to intercept the Ranafjord; an F 16 fighter and a helicopter were also scrambled; the aircraft was to fly low over the vessel to alert the crew to impending tragedy.
The ship was 40 minutes from running aground at Hals when the F16 was finally able to draw the attention of the Ranafjord's crew, who finally stopped the ship and dropped anchor. Police from the "Nymfe" boarded the "Ranafjord" later and found the 54-year-old Norwegian Captain- who was supposed to be on watch- dead drunk and asleep in his cabin. He was later arrested by the police on suspicion of sailing under the influence after a blood test revealed an alcohol content of 2.15%.
"The Captain tried to blame the First Officer, who was apparently equally drunk, but the logbook showed he’d gone off duty,” said a police officer last week. "They were definitely not sober on that ship," said a Police Commissioner from the Danish Police later, indirectly indicating that at least some of the other crew were intoxicated as well.
A Danish pilot guided the ship to Hals Barre, where it anchored waiting for the drunken Mate to sleep off the effects of his drink. Only after the officer was sober was the ship allowed to continue its voyage to Aalborg, where Danish police arrested the Captain.
The owners- Finn Olsen Rederi in Bodø- have a zero-alcohol policy in place, and expressed shock that several of the crew were apparently bombed out of their senses.  The managers of the vessel are Olsen F from Norway."It is a horrible tragic situation for us, we have operated the company for 50 years and have never experienced anything like this," said Vegard Olsen Finn Olsen.
Many Asian crews will tell you that the drug and alcohol policies rigidly enforced on them do not seem to apply to European navigators where heavy drinking is not uncommon, especially on small coasters plying around the continent. Critics say that zero tolerance to alcohol and tobacco is unnatural, and results in increased alcohol-related accidents; there is also a massive tobacco contraband issue in Europe. Minimal crews on coasters result in fatigued crews; hypocritical alcohol policies only add to their problems.
It is therefore not surprising that the well known journalist and campaigner Voytenko Mikhail  says, commenting on the Ranafjord incident, "The stricter the restrictions, the worse are the consequences. Fighting human nature with restrictions is as feasible an undertaking as fighting volcano eruptions with city fire teams".
Posted by manu at 13:21