Eleven really old bottles of Champagne were auctioned for more than $156,000 this week. Recovered from a sunken schooner, they had spent 170 years on the seabed off Aaland, an archipelago of 6500 island between Sweden and Finland in the Baltic Sea, before being discovered by amateur diver Christian Ekstroem. Appropriately, Mr Ekstroem manages a pub for a brewery in Mariehamn, Aaland's only city.  The Aaland Islands are situated at the entrance to the Gulf of Bothnia and are autonomous within Finland, with their own government.

“We didn’t know what we had found at first,” said Ekstroem, referring to his group of eight divers. “I brought a bottle up and the closer I got to the surface, I had to hold the cork down with my thumb. It popped when I was in the boat, so we poured some into cups. We had no idea how valuable it was.” 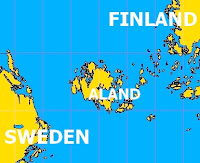 What was unique- or providential- about the discovery was that the Champagne was in perfect condition what with the bottles having gently fallen horizontally in ideal conditions in the dark and freezing waters of the Baltic. Six of the bottles were from the house of Juglar that closed shop in 1829. Four were the expensive Veuve Clicquot and one was Heidsieck, which was auctioned for 11,500 Euros, The Clicquot sold for 15,000 Euros. The auction of all the bottles together fetched 125,500 Euros. There were many more bottles found in the wreck- a total of 162, and also 5 beer bottles- but only 79 were deemed drinkable. Aaland will sell some of the Champagne to fund maritime archaeology and environmental projects in the Baltic.

Veuve Clicquot has dated the corks from the Champagne bottles found to roughly the years 1831-1841. The schooner was a typical two-mast sailing vessel 'schooner-rigged', a common sight in the area at the time.

Project Manager of the 'Champagne Project', Aalander Lina Dumas is happy with the auction for another reason not to do with money.  “Most people don’t know where Aaland is or even that it exists, so we’re very happy to have this opportunity to share our maritime cultural history and finally put Aaland on the map,” she said at the Aaland Maritime Museum, close to where the bottles were eventually auctioned.

The five bottles of beer are being used by Stallhagen, the brewery Ekstroem works for, to make new 'recipes' based on the discovery. Sadly for Ekstroem, wrecks more than 100 years old belong to the government and his group of divers who discovered the Champagne will make no money.

“We’ve had nothing, not even a thank you,” Ekstroem said in an interview at the brewery. “It’s not even about the money.”
Posted by manu at 08:34 No comments: 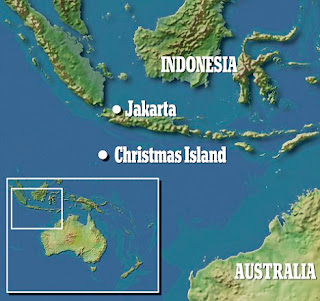 Serious questions are been raised in Australia about the behaviour of both the Australian and Indonesian authorities regarding the sinking of a boat carrying 200 refugees off the Australian Christmas Island. The search for survivors was called off says later, with as many as 90 people feared dead. Six bodies have been recovered so far. The boat is believed to have started her voyage in Sri Lanka with mainly Afghan refugees- or asylum seekers, as Australia calls them.

A spokesman for the Australian Maritime Safety Authority (AMSA) said that there would not be a search for bodies off Christmas Island any longer. “The operation is now ceasing,” he said. “It is believed over 200 people may have been on board the vessel, but an accurate number may never be known,” he added.  The incident bore a striking similarity to the 2010 sinking of the boat 'Siev 221'-fifty people were killed in that disaster, including many children and babies as young as three months-old.

The backdrop to the tragedy is the fractured emotive and politically toxic issue of Australia’s overcrowded detention centres- including at Christmas Island, where the boat was heading- and the emergence of right wing- sometimes xenophobic- politics in connection with refugees. Australia guards its borders zealously, and asylum seekers are being sent to a notorious detention centre in Nauru, and, more recently, to Malaysia, besides Christmas Island.

Meanwhile, the latest tragedy- the capsized boat and ninety dead refugees- is still unfolding, and is threatened to be overshadowed by a report of a series of faxes between the Indonesian and Australian authorities that reveal what one commentator has called 'shameful behaviour'.

The first fax was sent at 2.08am Sydney time last Wednesday, saying that the boat had telephoned AMSA to say that it was taking in water about 38 nautical miles south of Indonesian land; AMSA advised them to return back to Indonesia. The asylum seekers did not do this for obvious reasons. Six hours later, Indonesian SAR issued an alert asking ships to lookout for the vessel that was sinking.

At 12.41pm, AMSA faxed Basarnas saying that the boat had called them again, saying that they were taking in water. "RCC passes this information to your centre for action," AMSA said. An Australian minister said that Australian planes had spotted the boat.

It was only the following afternoon- Thursday- when the situation had become critical, and after it was clear that no help was coming from Indonesia, that Australian rescue ships were dispatched. They found a capsized boat with bodies and people in the water, and many survivors clinging to the hull of the overturned boat. Another fax sent that evening to Basarnas said, "Australia hereby accepts co-ordination for the search and rescue incident involving the upturned unidentified distress vessel. Please acknowledge receipt of this message."

Australians are now asking why, if AMSA knew on Wednesday that the boat was doing only two knots in the opposite direction from the one they had recommended, if they knew for 30 hours that the boat was taking in water, and if they were getting calls from refugees fearful for their safety, then why nothing was done sooner. Critics concede that the boat was in the Indonesian SAR zone, but then, as one Australian paper says quoting the AMSA website, "so is Christmas Island."

"If an inquiry were to find that public servants even for a second considered the dire political scene in Canberra as they made life and death decisions, then the politicians who have engineered this deadly situation should be profoundly ashamed," the Sydney Morning Herald says.
.
.
Posted by manu at 08:29 No comments:

Email ThisBlogThis!Share to TwitterShare to FacebookShare to Pinterest
Labels: refugees

$1 Billion floating LNG terminal to come up at Kakinada.

Dow Jones newswires reports that Kakinada Seaport will build- along with Royal Dutch Shell PLC and Reliance Power Ltd- a dedicated floating liquefied natural gas terminal at Kakinada in Andhra Pradesh.  Quoting company sources, the agency says that the capacity of the terminal, when completed, will be 5.0 million-tons-a-year. Shell and Reliance Power together hold a majority stake in the consortium, with Kakinada Seaports the minority partner.

Expected to be operational in two years by 2014, the terminal will cost $1 billion and compete with quite a few other LNG terminals that are being planned elsewhere in the country.  The capacity of the Kakinada Seaport LNG terminal may be doubled later, Reliance Power says.  The company will benefit even more from the project because it will get access to LNG for its upcoming 2.4 GW power project in Andhra Pradesh.

Shell is already in a partnership with Total SA in India, operating the Hazira terminal with a capacity of 3.6 million tons- to be expanded to 5.0 million tons later. Many local and international players are eyeing the market in the energy deficient country, looking to exploit demand that is expected to grow considerably on the back of increasing domestic and industrial LNG requirements, particularly from the power, petrochemical and refinery sectors.

The country's present LNG import capacity is expected to skyrocket more than four times in the next five years- from about 13.5 million tons today to 50 million tons by 2017; many power projects are stuck because of the present severe LNG shortage. The fuel crunch has also forced the government to advise local power companies not to plan domestic gas-based projects until March 2016, Dow Jones reports.

The unsatisfactory implementation of the National Maritime Development Programme (NMDP) seems to be in line with the general apathy that has gripped the decision makers in the UPA Government.  A Parliamentary committee has now come down heavily on the Ministry of Shipping for what it says is its "miserable failure" to spend budgetary allocations in this critical sector. The Committee on Estimates now wants to know the status of incomplete projects, reports say.  Around 275 projects were planned under the NMDP when it was unveiled in 2009; many languish today for one reason or another.

Out of the 1-lakh crore rupee allocation during the 11th Plan (five years ending in 2012), only 13 percent has been spent, the Parliamentary committee says.  “The Ministry has been able to spend only 12.88 per cent out of the total projected outlay of Rs 1,00,399 crore provided for the port sector during the entire 11th Plan. The situation is alarming as the Ministry has miserably failed to perform both financially and physically,” the report adds.

Notwithstanding the Ministry of Shipping's ambitious plans announced last year that envisaged reforms and an investment of Rs 3 lakh crore in the port sector by 2020, the Parliamentary committee says, “The committee is inclined to conclude that the Ministry has neither seriously planned their projects nor monitored all the ongoing projects to ensure their timely completion.”

Only three projects of the 276 identified under the NMDP through the public-private partnership (PPP) route have been awarded so far; twenty three- worth Rs 16,744- were to have been fixed last year. Alarmed at the delay, the Prime Minister was reported to have intervened, asking for ' fast-tracking' of the delayed projects.  Even so, nothing much seems to have happened since then, going by the Committee's report.