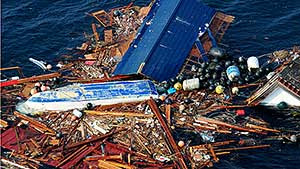 Gigantic islands of rubbish in the Pacific- that include entire houses, bodies, scrap, boats and cars - have been swept out to sea after the earthquake and tsunami in Japan last month. This huge patch is reported to be heading west slowly, causing chaos in shipping lanes as vessels try to keep clear to avoid damage to hulls or the fouling of propellers. The largest floating island is said to be sixty nautical miles long and covers an area of 2.2 million square feet, warns the US 7th fleet on monitoring duty. Observers have seen whole buildings, boats and cars floating off the coast of Eastern Japan.
"It is very large and it's a maritime hazard," Lieutenant Anthony Falvo, deputy public affairs officer for the US Navy's 7th Fleet, told the Daily Telegraph. "The damage it can cause is anything from piercing the hull of a ship to leaving dents or getting wrapped up in propulsion systems." The US navy is involved, along with construction firms from Japan, to see if this ocean debris can be cleaned up. The US is particularly concerned because scientists have predicted based on ocean and weather patterns, that the debris could reach the US West coast in three years, and the Hawaiian Islands in two. Modelling done at the University of Hawaii confirms this, with experts saying that some of the debris could break up in storms before it reaches the coast.

"In a year, the Northwestern Hawaiian Islands Marine National Monument will see pieces washing up on its shores. In two years, the remaining Hawaiian islands will see some effects," the researchers say. "In three years, the plume will reach the U.S. West Coast, dumping debris on Californian beaches and the beaches of British Columbia, Alaska and Baja California. The debris will then drift into the famous North Pacific garbage patch, where it will wander around and break into smaller and smaller pieces," they said, warning that the bigger patch thus created would wash up ‘stronger and longer lasting’ in Hawaii after five years.

Meanwhile, Japan’s neighbours, led by China, are getting increasingly concerned at the 11.5 million liters of radiation-contaminated water that Japan has dumped into the Pacific Ocean. China urged its neighbour last week to "act in accordance with relevant international laws". The Japanese say that the contaminated water poses no risk to human health, and it did not consult its neighbours before the dumping. The Chinese have already asked Japan to “provide China with timely, comprehensive and accurate information." Xinhua, the Chinese official news agency, has reported small amounts of radioactive Iodine-131 on spinach plants in Beijing and Tianjin, but officials said that the trace amounts posed no danger.

To add to Japan’s woes, some countries, including the US, China and Singapore, have blocked food imports from some parts of Japan amidst radiation contamination fears. Many are concerned about high radiation levels of Iiodine-131- 4000 times the legal limit was detected in one measurement. Fishing has been banned within 20km of Fukushima, the affected nuclear plant. Observers say that the deliberate dumping of radioactive water into the sea- which has angered the powerful fisheries industry in Japan- may result in compensation claims of more than 10 trillion yen ($120 billion) against the operator TEPCO. Environmentalists have expressed grave concerns at the threat to marine life in the region due of water contamination.

Some good news amidst the havoc: A dog rescued from drifting ocean debris was reunited with her owner last week at an animal shelter in Japan. The owner of the 2-year-old ‘Ban’ happened to see the rescue operation on television, and was obviously thrilled to find out that the pooch was alive.