Is this appeasement of ‘out of control’ criminals? 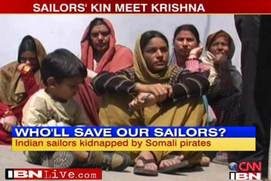 Even as reports out of the UK say that the country is upping its budget by 9 million dollars to fight piracy, Tehelka in India reports that New Delhi is planning to engage Somali pirates by ‘engaging them in projects and creating jobs for them in Somalia’.
Indian Minister for External Affairs SM Krishna said after meeting Somali Deputy Prime Minister Abdiweli Ali in Delhi recently that job-generating projects in Somalia would help tackle piracy.“We have suggested to the Somali government through its Deputy Prime Minister that they should endeavour to create more jobs by taking up projects which the Government of India would be willing to help in implementing," Krishna is quoted as having said. As for the 53 Indians the government says are held hostage by pirates-unofficial figures are much higher-, Krishna commented, “"I did bring about the issue of 53 of our hostages with the pirates. And I have requested the good offices of the Somali transitional government be used for the release of these Indian hostages." Krishna also revealed that about 100 Somali suspected pirates were in Indian custody, where “the law would take its course.”


Elsewhere, Britain said that it was throwing in an extra $9 million to fight piracy in the Indian Ocean amid warnings that hijacking is increasing beyond control. With 150 ships having been hijacked in the last two years and well over 500 hostages being held currently. A London law firm says that matters were “deteriorating at every level”. "The number of crew and vessels captured is increasing, size of ransom is increasing and the length of time of capture is increasing," says Richard Neylon, a security expert involved in the release of the Chandlers who were taken from a yacht by pirates in 2009 and held hostage for over a year in Somalia. Neylon said that nowhere in the Indian Ocean was safe.


Security company Risk Intelligence says that there has been a noted increase in the use of violence and firepower deployed against ships. In the last six months, reports of RPG fire have increased; in one case in November, a pirate vessel was seen for the first time with a heavy machine gun fixed on deck. Pirates are engaging shipboard armed teams in direct fire today, a departure from the time when warning shots fired in the air were enough for an attack to be aborted. Risk intelligence says that pirate strategy and tactics are changing, with reports of them training on hijacked ships on ways to breach citadels. “There will be new additions to patterns in trends and tactics on behalf of the pirates and the need to adjust to combat. Unfortunately, however, it will be another round of much of the same on land – a lack of progress.”

A Times report in the UK says that the crew are held in ‘horrific conditions’ by pirates in Somalia, with the average period of capture having gone up to six months. During this time, the crew typically ends up with “a range of physical illnesses including skin diseases and malnourishment, as well as psychological trauma”. The report does not mention the torture of crews, their use as human shields or the regular threats of execution hostage crews routinely face.


Analysts say that Krishna’s diplomatic statements following the Somali Deputy PM’s visit to India do not count for much, given that the Transitional government in Somalia has ceded large swathes of the country to terrorist groups and pirates, some of whom are in cahoots. Moreover, any initiative that presumes to think that the creation of jobs in coastal areas will wean away the youth there from the criminal enterprise of piracy, where millions of dollars are involved in ransoms, is just wishful thinking.


Krishna’s statements seem to reflect a desire by the Indian authorities to be seen to be doing something and not much more than that. Perhaps Mr Krishna’s External Affairs Ministry should be concentrating more on its citizen seafarers- including their lives and jobs- instead of finding misguided ways of creating jobs for Somali pirates.

Email ThisBlogThis!Share to TwitterShare to FacebookShare to Pinterest
Labels: piracy