World’s first superyacht that doubles as a submarine 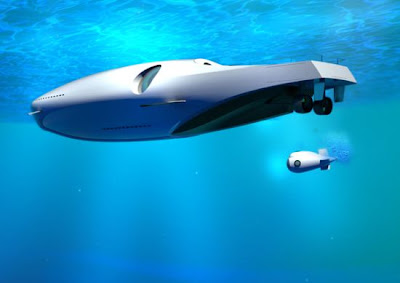 The U-010 Undersea Yacht concept by industrial designers Marina Colombo and Sebastiano Vida is a first even for luxury yachts: the 67-metre boat can shift between diesel and electric propulsion to either cruise the waves in good weather or, if the weather gets bad, go underwater like a submarine.

It looks like a fashionable apartment from within, albeit with a huge aquarium. The latest in luxury, the design of the U-010 would allow the filthy rich to cruise underwater in comfort. "Submarines are generally thought of as cold and cramped military crafts," Italian designer Sebastiano Vida told CNN. "But this concept radically moves away from that assumption and introduces a new and luxurious way to experience life beneath the seas." 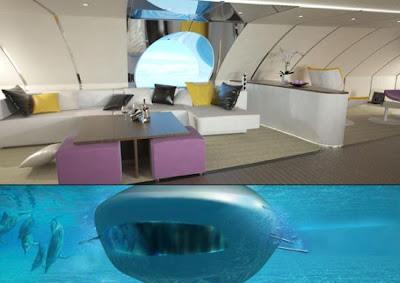 The U-010 has a spiral staircase, lounge bar, sauna and relaxation parlour. The designers insist the design is robust. "It may look like a fantasy but we examined all the latest technology for constructing underwater vessels to ensure our concept would be viable," said Vida. "We're looking for the right engineers to work with, and think it could be built within the next five years." Marina Colombo says that multi-millionaire venture capitalist Tom Perkins may be a customer. "Tom Perkins commissioned the "Maltese Falcon", which was once the longest yacht in the world -- and we know that he'd want to build a submarine now,” she says. Richard Branson is another potential client the designers seem to have in mind.

The designers hope to be able to roll out the super yacht by 2015. The aerodynamic vessel will be equipped with integrated systems of stabilisation and its hybrid engine will switch from diesel to electric propulsion automatically when it submerges. 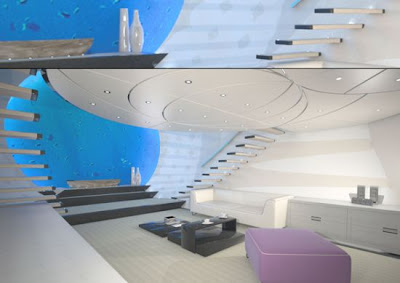 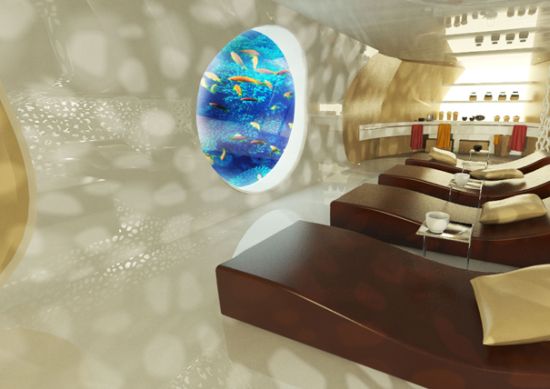 Critics may well say that there will be constraints in design building a cruiser that can also withstand deep-sea water pressures. We hope this futuristic yacht/sub will be built, though, simply because it looks like something straight out of a James Bond movie. One can just visualise Connery laconically shooting the last villain before jumping on board, even as Ursula Andress slowly submerges the submarine, just before they retire down the spiral staircase to the parlour with a martini.
.
.
Posted by manu at 13:42