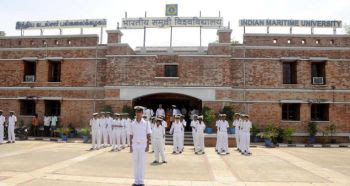 Media reports, including in the Chennai based ‘The Hindu’ say that “the Madras High Court has ordered notice on a writ petition seeking a direction to the Centre and the CBI to investigate and take action against the Vice-Chancellor of Indian Maritime University (IMU) at Uthandi and disaffiliate maritime institutions which had collected excess fee”.


The Hindu report further states that this is to “ensure that all IMU-affiliated institutes collect only the university-prescribed fee”. The Court has taken notice based on a petition filed by the Chennai based Maritime Institutes Association (MIA), represented by Secretary C.V. Jothikumar. The matter came up before the First Bench, comprising of Chief Justice M.Y. Eqbal and Justice T.S. Sivagnanam. Additional Solicitor-General of India, M. Ravindran, took notice.

It is alleged that the IMU listed, on its website, only 18 of the 26 approved institutes that were earlier conducting a one year diploma course after due approvals from the Indira Gandhi National Open University; IGNOU was responsible for the conduct of the course at that time. This year, the common entrance tests for admission were held on June 21 this year under IMU control.


Zeenews quotes a PTI report saying that the MIA sought the CBI probe for allegedly collecting exorbitant fee from ‘at least 10 private nautical science institutes’. The MIA has reportedly asked for appropriate action to be taken against the Vice Chancellor and the institutes involved. The petition alleges that the excess fee amounted to “several lakhs per head.” Justices Eqbal and Sivagnanam have clarified that admissions into the institutes named would be subject to the outcome of the case.

It is learnt that the MIA has another petition before the Madras Court, unresolved so far, alleging that the other eight institutes were allowed to admit students without sitting at the entrance test. The MIA has named nine institutes in Maharashtra, Andhra Pradesh, Kerala and New Delhi that “are collecting tuition fees ranging from Rs 2.25 lakh to Rs 4.71 lakh for the B.Sc (Nautical Science) course, in violation of all norms”, says Zeenews from the PTI report. The petition also reportedly accuses the VC of granting affiliation to a new maritime academy not earlier approved by the Director General of Shipping.

The PIL asks that the “IMU be restrained from allotting any seats to the nautical science courses for the coming academic year”.
.

Email ThisBlogThis!Share to TwitterShare to FacebookShare to Pinterest
Labels: IMU