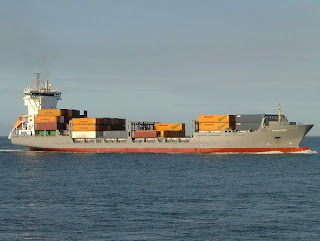 Israeli commandos board and arrest containership near Cyprus.
Prime Minister Netanyahu told the Israeli parliament that the 'Francop' had been seized about 100 miles off the Israeli coastline and those elite Israeli commandos had found that arms and ammunition on board. The Francop, an Antiguan registered 2003 built vessel, apparently claimed to be on a humanitarian mission and tried to evade capture. The BBC reported that the Francop has been taken to Ashdod port in Israel for inspection. Israeli defence sources claim that the arms were destined for Hezbollah and had been shipped by Iran. However, the operators of the Francop, Cyprus based UFS, told the media that they were unaware of the contents of the owners, were not the owners of the ship, and were in any case legally not permitted to check what was in the containers. "That is the responsibility of the customs authorities at the ports we call", a spokesperson for UFS said. The containers in question originated in Iran, according to Israeli sources. The Francop was on a voyage from Iran bound for Syria or Lebanon, with intermediate calls in Yemen and Sudan. The crew of the vessel has denied any knowledge about the armaments in question.

Senior NATO adviser criticises British government for not investigating piracy links to terrorists. Lord Jopling says "paying off pirates could encourage terrorist groups into further acts of piracy." Jopling has written a report for NATO. Titled, "The Growing Threat of Piracy", the report says that much greater effort is needed to examine links between piracy and terrorism. “There is as yet no evidence that money goes to terrorists, but given all of the rumours that al Qaeda has active cells in Somalia, it would not be of huge surprise if there is a connection there," it says. "We will not find out until the government takes the initiative with other interested states to look at the magnitude of the sums involved and where the money is going.” Industry analysts say that a declared link between terrorism and piracy could queer the pitch for ransom payments, as they would then become illegal in the UK, being considered as funding terrorism. The British Home office had promised four months ago to investigate links between Somali pirates and Al Shabaab in Somalia, who many believe is part of the Al Qaeda network. The present scenario allows shipowners to pay ransoms and be reimbursed by insurers. If this is the reason for the government dilly-dallying, observers say, it is a dangerous game they are playing.

Union Home Ministry refuses to confirm Nov 2 intelligence alert warning of sea based terrorist strikes. Earlier, an ANI/Times Now report had said that an alert had been issued by the Intelligence Bureau for Mumbai, Bangalore, Chennai and Kolkata following information that about three dozen members of the Lashkar e Taiba were planning to attack from the sea, and that the Navy, police and Coast Guard had been put on a nationwide high alert in all these cities as well as in Ahmedabad.
The alert was based on specific information, the news channel claimed. The reasons for the authorities refusing to confirm the IB warning are unclear, but security experts say that these attacks are linked to plans of Pakistan based terror outfits to unleash a major attack to mark the first anniversary of the Mumbai attacks. The arrest of terror operatives in the US and the subsequent FBI warning to India alerting authorities to possible attacks on prominent boarding schools in North India as well as on a military establishment in Delhi bear this thinking out.
.