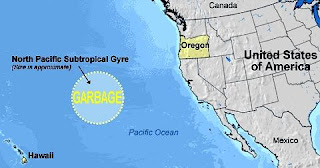 Knowledge of the existence of the ‘Great Pacific Garbage Patch’ is hardly new: believed to be roughly twice the size of Texas, the “Plastic Vortex”, another name for this area, is a vast area of the Pacific awash with garbage. It does not have strict boundaries, which vary seasonally. Moreover, although floating patches and small pieces of plastics and garbage have been long reported by fishermen and seamen transiting the zone little was known about the magnitude of the problem until Project Kaisei was launched last year.


Project Kaisei (Kaisei is Japanese for Ocean Planet) uses the Tall ship Kaisei to determine the best way to clean up this ‘8th Continent’: research is being conducted to determine whether the all pervasive plastics found in this huge area can be collected and recycled effectively. Plastics kill marine life, enter human food chains and have an overall detrimental effect on human and animal health. Unfortunately, over 60% of plastics and other wastes (including rubber and aluminium) in the ocean come from land based sources and move around with tides, currents and winds once they are waterborne. Even worse, plastics degenerate into smaller pieces over time and with ultraviolet effect. It is a huge problem: we produce 260 million tonnes of plastic annually, and National Geographic says that 85 million plastic bottles are used every three minutes.


The ‘Garbage Patch’ is not all pervasive or dense; it consists mainly of millions of minute pieces of degenerating plastic and other garbage that accumulate or are trapped within spiralling clockwise currents between Japan and the American continent. Nevertheless, signs of the degeneration are ominous and obvious in good weather. Mary Crawley, one of the founders of the project, says, "I've been out to the same part of the ocean 30 years ago, and then it was clean oceanic wilderness. Now it's like a dump." Crawley was on board the ‘Kaisei’ along with two dozen other scientists and key personnel to research the gyre and find solutions. She told CNN, "When you're first out there, you see this beautiful, beautiful deep blue ocean. And then you look closer, and you see that there's this proliferation of floating garbage. And depending on what part of the ocean one's in, you can stand on the bow of the boat and count 400 pieces of garbage. Or in some places, you might only find 25 to 50 pieces."


The Scripps Institution of Oceanography at the University of California, San Diego, also lent its research ship ‘New Horizon’ to the Project. Along with the Tall Ship Kaisei, the vessels covered 35000 miles in the region, collecting and analysing samples and examining options. They found some larger pieces of plastic and other garbage, but what shocked them was “the density and the pervasiveness and extent" of small plastic particles they found. Both ships started sampling the water to collect organic life about 400 miles off the coast of California. Out of more than a hundred samples, not a single net returned without little plastic particles. “Because they (plastic pieces) are so small, it's hard to find water without it," Crowley said. Experts say that the effect on the health of other marine life and humans eating this contaminated fish could hardly be positive.


One problem is that calm weather is required for collecting the garbage. The Project is contemplating the possibility of installing a recycling plant on a ship, which could collect garbage round the clock in good weather. Also being examined: ways to convert plastic to fuel or building material using advanced and patented technology.
.