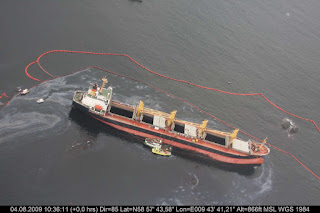 
Mumbai October 4 The two officers charged with negligence in the ‘Full City’ incident are ‘lost, confused and losing spirit’, according to their lawyer. The Captain and Third Officer of the ship, now under arrest in Norway, will hear next week whether they can return home pending investigations. The two seafarers, a Captain who was due to retire for health reasons this year and a first trip Third Mate both face charges of gross negligence in relation to the disaster.


The treatment of the pair has received international condemnation, with Intermanager’s Roberto Giorgi saying that if the case goes to the Supreme Court for trial he would contact Intercargo and the International Transport Workers Federation to discuss a joint industry response to the Norwegian authorities. Mr. Girogi added that it was vital to continue the push for uniform regulation around the world that would protect seafarers’ from unreasonable prosecution, adding that the case seemed to involve “local authorities who know nothing about shipping, and have no clue about the role and responsibilities of seafarers”.
Lawyers for the two officers, as well as those representing Cosco and the London Steamship P&I Club, say that initial charges against the two were relatively minor and pertained to violations of the Norwegian Safety Act. Others have been critical of the fact that the two had their passports impounded even before they were charged.


The 15 878 tonne bulk carrier ”Full City” grounded in a storm on July 31st near the town of Langesund in Telemark, Norway. Panama flagged and Cosco owned, she had around a thousand tonnes of bunkers on board and was in ballast. Norwegian rescue teams airlifted 18 crew to safety, five staying behind on board the ship. An unknown quantity of oil leaked out to the sea, polluting the area from Stavern to Grimstad. The spill spread over a 150 kilometre stretch of coastline in southern Norway and severely hit a bird sanctuary and a popular summer resort near Oslo. The news made national headlines a little before the Norwegian elections.


The Captain was initially charged with “not reporting that his ship was in a dangerous situation," police attorney Siri Karlsen had told a news conference in August; the charge carried a maximum two year jail term. The subsequent and infrequently used charge of ‘gross negligence’ came as a shock to the two officers.


The Norwegian Shipowners Association, meanwhile, has issued a statement that says that it is against the trend of criminalising seafarers. NSA lawyer Viggo Bondi says that the police need to ensure they have the full competence to deal with such a case. “If you don’t have the necessary competence it is easy to jump to conclusions too fast, then you criminalise seafarers,” he said. The NSA remained confident that the two Chinese would get a fair trial, though. “We have good regulations for the rights of people under investigation, and seafarers are not treated any differently,” Bondi said.


However, many in the industry agree that uniform regulation is urgently required to protect seafarers’ rights. Unfortunately, as Intermanager’s Giorgi says, “I can’t say we have seen a very strong message from the International Maritime Organisation in trying to deal with this issue.”
.