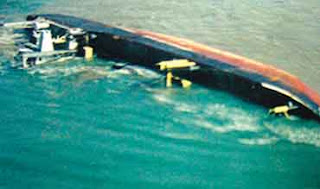 Are unprincipled traders to blame?


Mumbai Oct 9 Recent casualties involving ships loading iron ore fines in India have once again focused international attention on the perils crews are exposed to in this trade.
Industry associations and P&I clubs have long criticised the manner in which this loading takes place in India, and had surfaced issues of non transparency in shippers declaring the Transportable Moisture Limit, or TML.


The capsizing of the Asian Forest off Mangalore earlier this year and the Black Rose more recently off Paradip have made the international shipping industry express renewed concern about industry malpractices. Certain well known P&I clubs had issued circulars warning their members way back in 2007, when, over a span of a month during the monsoons, three ships suffered perils at sea post loading iron ore fines at Mangalore and Haldia. Two of those ships were beached to avoid capsizing and the third one diverted to Vizag where her entire cargo was discharged.


Manufacturers produce iron ore of several grades, some of which present risk of liquefaction; these are usually finely powdered ores, or 'fines'. To add to this problem, iron ore in India is frequently loaded from outdoor piles that are exposed to monsoon rains. The IMO makes it incumbent on shippers of any material liable to liquefy to declare this hazard and certify moisture content and the transportable moisture limit (TML, which obviously cannot be lower than the moisture content of the cargo to be shipped). Unfortunately, in India, some shippers have only provided certificates for moisture contents and not the equally important TML numbers, leaving Master's clueless as to the dangers their crews may be exposed. Recent Chinese demand for ore has meant that many unscrupulous traders and ship owners are out to make a quick buck, even at the cost of seafarer lives and environmental damage.


Capt John Prasad Menezes, President of the Kanara Chamber of Commerce and Industry, blames unscrupulous traders. "Due to the Chinese boom, charterers too sprung up from Kolkata, Mumbai, Singapore and Hong Kong. It is a question of cutting corners and staying competitive. In such a scenario, all aspects of trade tend to be safe in letter rather than in spirit," he is reported to have told a conference in Hamburg.

Greenpeace says that the Black Rose disaster could devastate the Orissa coast if the 924 tonnes of bunkers on the ship would leak out. A statement from the environmental organisation says, "Greenpeace is closely monitoring the effects of the spill, which is close to the Gahirmatha Marine Sanctuary, home to the endangered Olive Ridley turtles, and the Bitharkanika National Park, which harbours India's second largest mangrove ecosystem and has the largest population of salt-water crocodiles in India."


Needless to say, Masters must exercise extreme caution while loading powdered materials. We would have to say with regret that they should exercise particular caution when loading iron ore in India, asking for a recent and independent analysis of figures if felt necessary. Shippers and charterers should also be aggressively queried as to the TML and the moisture content of cargo to be loaded in each hold.


Meanwhile, the DG Shipping has issued a circular dated 25 September. Titled
"Additional Safeguards for safe carriage of solid bulk cargo especially Iron ore fines from Indian Ports", MS Notice 31 recognises that " shippers and port authorities are not extending the support to the Masters of the ships calling Indian ports for loading Iron ore fines" and issues directions to agents to advise ships calling their ports about the risks of loading iron ore fines during monsoons. Ports, too, are directed to "do everything possible to ensure safe carriage & transportation of solid bulk cargo including Iron ore fines" as per existing regulations and guidelines for loading bulk cargoes.