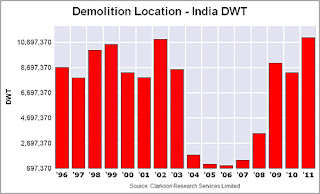 It remains uncertain who will win the top spot in global ship breaking this year, experts say, pointing out that continuing legislation and court judgements in South Asia will have a major impact on demolition profitability. Meanwhile, in an attempt to assuage fears in Alang and to help Indian ship breaking yards compete better against a resurgent Bangladesh, the Ministry of Environment and Forests (MoEF) has clarified the recent Supreme Court ruling in the country- a judgement that had thrown the business into some disarray.

India will face stiff competition from Bangladesh and Pakistan, analysts warn; the falling Rupee has already hit profitability hard, even though Alang remains the leading ship-recycling yard in the world catering to nearly 90% of Indian demolition activity. The Indian industry has an estimated annual turnover of about Rs 10,000 crore and directly or indirectly affects the livelihoods of 300,000 people.  However, it has lost almost a thousand crores this year because of cash deals- the prevalent custom- in a depreciating Rupee scenario.

Meanwhile, Bangladeshi ship breaking activity- that was almost shut down last year- has accelerated. Reports the well-known demolition newsletter, the GMS weekly, "Bangladesh has indeed been the busiest market of the year so far, opening fully again at the start of the year."

GMS is still bullish on India. "Having been relatively quiet in the preceding few months due to a struggling currency (which saw some end buyers lose about 20% of the value of their previous purchases), India is now enjoying its moment in the spotlight as deals continue to be tucked away at vastly improved numbers", it says.

The July 30 Indian Supreme Court judgement apparently upholding the Basel Convention- a treaty on the international movement of hazardous wastes, including ship recycling- had caused some panic in Alang. The ruling said, “... in all future cases of a similar nature, the concerned authorities shall strictly comply with the norms laid down in the Basel Convention ... before permitting entry of any vessel suspected to be carrying toxic and hazardous material into Indian territorial waters.”

Some buyers had stopped buying ships for scrapping after this ruling, fearing huge losses if the ships were not allowed into India. They also feared that dead vessels would have to be towed from other countries under the SC ruling.

They should breathe easier now that the MoEF has stepped in to clarify the SC; it has said that the SC's orders issued earlier- in 2007- still apply; these have already been implemented in Alang and elsewhere and should pose no problems.


Some ship breakers are circumspect about the future, though. "We will have to wait and see. Only after 3-4 months one can say whether India will be able to keep the top title this year as well," said an Alang-based ship-breaker to the Indian Express newspaper before the MoEF clarification.
.

Email ThisBlogThis!Share to TwitterShare to FacebookShare to Pinterest
Labels: shipbreaking