Explosions on Indian tanker at Fujairah kill at least three 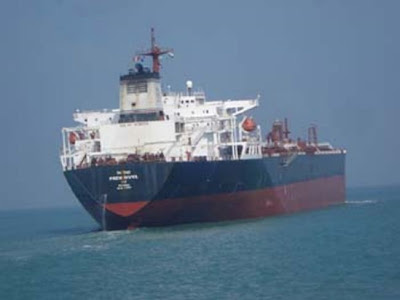 A string of explosions on an Indian Aframax tanker at a facility at Fujairah in the UAE has resulted in at least three casualties. Two more people are missing and one seriously injured worker has been admitted to hospital after the incident occurred two days ago. Authorities have begun an investigation into the cause of the explosions, a report in the Abu Dhabi based 'The National' newspaper says. The Coast Guard and civil defence authorities are searching for the missing men; it is not clear whether they jumped into the water like many others when the explosions took place.
The 'Prem Divya' - a 109,227 DWT Mercator Limited owned and Anglo Eastern managed tanker-had arrived for scheduled maintenance at the facility two days after Christmas. It is believed that the tanker- that was certified gas-free at some time after arrival- had about a hundred local repair workers on board to check the pipes, carry out maintenance and do some hot work in the engine room. Eyewitness accounts indicate that the blasts were triggered off during welding. Many of the men aboard the Prem Divya jumped into the water when the explosions occurred, from where they were rescued by nearby ships and the local Coast Guard later. Port authorities activated teams that are said to have put out a fire on the tanker after the explosions.
Capt Mousa Morad, the General Manager of Fujairah port, has confirmed to reporters that the vessel was certified gas free, adding that it was not yet clear what caused the incident. "We already got that", he said, referring to the gas free certificate, "so what went wrong, we don't know. Any tanker that has gas in it should be made free of gas before any welding or hot work takes place."
Mr Ishtiaq Ahmed Malik of the Blue Sea Shipping Agency- that was handling the 1998 built Lloyd's classed Prem Divya at Fujairah- confirmed that there were three explosions. "There were three blasts - boom, boom, boom - so the people were in panic," he said.
Representatives from the owners and insurance companies have arrived at Fujairah to investigate the incident. Reports say that around half the 24-man crew of the Prem Divya have been moved to a local hotel after the explosions. One of the seriously injured has been admitted to Fujairah Hospital with burns and facial bone fractures. "His case is still not stable," said Mohammed Abdullah Said, head of the Fujairah health district.
The investigations will undoubtedly take some time before a clearer picture emerges to indicate what caused the explosions in the first place. As Capt. Morad says, "There's money, there's insurance, there's some people missing - so many things."
Posted by manu at 11:09