"Shades of the Kowloon Bay and Derbyshire?" 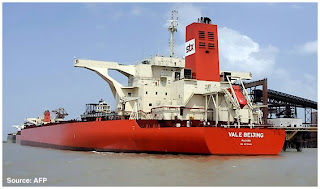 One of the biggest ships in the world is in trouble after springing a leak soon after loading; reports at the time of writing say that the 400,000-tonne Vale Beijing has been moved from its pier at Ponta da Madeira Maritime terminal in Brazil and towed to an anchorage area for repairs.
The 361 metre Vale Beijing- a megaship ten times the size of the Titanic- is loaded with 384,300 tonnes of high grade ore mined by the giant mining company Vale; the cargo is worth 50 million dollars and was loaded bound for Rotterdam when cracks in two of the Beijing's ballast tanks appeared, indicating some sort of loading or structural problem.
Fears that the Vale Beijing could sink alongside and block a terminal that handles a tenth of the world's iron ore undoubtedly prompted the authorities shifting the vessel to anchorage, but repairs will not be easy because there are no facilities to discharge ore at Ponta da Madeira and no suitable shipyards are available. The Vale Beijing is one of the first of nearly three dozen massive "Valemax" vessels that Vale has commissioned in an attempt to reduce transportation costs and exploit economies of scale, but the project has been beset with many problems even before the cracks appeared in the Vale Beijing's tanks. 3


The Vale Beijing is more than twice the size of normal large bulk carriers; with this incident, the questions raised earlier about the Valemax's structural strength are now resurfacing. "Everyone is waiting to see if the sea will beat these ships to death," says one industry expert. Another analyst says, talking about incidents in the 80's when large bulk carriers broke up at sea due to structural problems, "There is a difference between passing the risk test on a desktop and passing it in the open sea. Are we seeing shades of the Kowloon Bay and Derbyshire?"
The Vale Beijing has suffered from controversy ever since it entered service this year. Chinese ports - reportedly under pressure from Chinese companies and ship owner's associations who feared that Vale would control the market- refused the ship entry, causing the first lot of cargo to be sent to Italy instead. The problems for Vale were magnified because the VLOC's (Very Large Ore Carriers) like the Vale Beijing were built mainly for the China trade- the country is the world's largest ore importer- and so an unofficial ban on these megaships in China spelt commercial disaster for Vale.
“They have had several setbacks now in less than half a year — all the issues with regards to whether they will be allowed into China,” says Intermodal's George Lazaridis in Greece. “They have not been able to compete on the main route they wanted, from Brazil to China.”
No doubt Chinese and other ports will be watching developments even more carefully now; the repercussions are likely to be severe should an enquiry reveal structural problems on the Vale Beijing.
No port will want to take unnecessary risk should that be the case. “There is an accumulation of pressure on Vale at the moment with different factors all happening at once,” says one shipping expert.

“If this turns out to be very serious, then everyone will have to go back to the drawing board"
Posted by manu at 15:05