"Not an object to travel in, but a place to be" 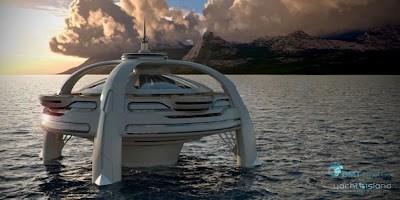 British design company BMT Nigel Gee revealed details of ‘Project Utopia’ a few weeks ago; developed in partnership with Yacht Island Design, Project Utopia is a futuristic concept that looks more like an oil rig than a yacht. It is actually neither- the best way to describe the Utopia is a 'floating, sailing micro-nation", we think, except that it will probably be moored at different locations for long periods while users fly in and out by helicopter. It will also have enough space within it to cater to large numbers of people- or some very rich individuals and their entourages.
The designers say that the four-legged platform design uses the same principles of any small water-plane area diving support vessel, guaranteeing minimum motion in even the most extreme sea conditions. Said BMT Nigel Gee's Yacht Design Director James Roy, commenting on the concept, “Utopia is not an object to travel in, it is a place to be, an island established for anyone who has the vision to create such a place.”
The Utopia will measure 100 metres in length and breadth and span over 11 decks, enclosing within it a volume equivalent to that on a present-day cruise liner. The large central structure seen in the graphic will act as a as the conduit for the mooring system and will house a wet dock for access. Each of the four legs will support an azimuth thruster; put together, these will allow the Utopia to 'sail' to a new destination at relatively slow speed, where it will moor for a while. Multiple helicopter pads will allow people to fly back and forth from a nearby coast.
A retractable canopy on the uppermost deck tops up eleven decks of accommodation and service spaces. The “13th Floor,” a staggering 65 metres above the surface of the water, will have an observatory with 360-degree views.The design of the interior of the Utopia is flexible; although it is currently configured like a cruise liner - a mix of retail districts, theatres, restaurants, bars, nightclubs and a casino- it could be redesigned for almost any purpose.
BMT Nigel Gee said that the design "breaks the traditional naval architectural mould which the market has come to expect and offers a truly unique outlook free from any conventional design constraints." James Roy added, "Our forward thinking approach and unrivalled state of the art engineering experience allows us to work closely with designers, stylists and shipyards, to bring these ideas to life and lead the market into the next generation of naval architecture.”
The concept of a floating island is not new, but initiatives by some designers to come out with ideas to do with 'seasteading'- where larger numbers of people live for long periods on water- are now taking off. Although costs and accessibility issues mean that concepts like the Utopia will remain the preserve of the rich and famous for a while, designers say that a time will soon come when such futuristic concepts will be built for larger masses of less affluent people.
Posted by manu at 06:11