The PlanetSolar project- first around the world on solar power 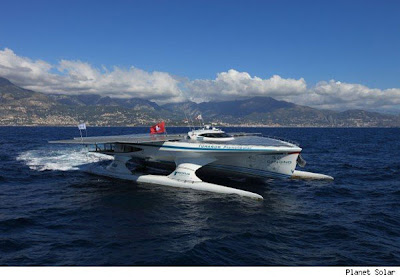 The catamaran "Turanor PlanetSolar" will arrive in Singapore this week on a round the world voyage that started almost a year ago in Monaco. The sleek, futuristic catamaran is the brainchild of Swiss national Raphael Domjan; it is completely solar-powered and will be the first such vessel to circumnavigate the earth.
Unconfirmed media reports say that Mumbai the Turanor's next halt after Singapore, suggesting that the catamaran will touch Mumbai, Djibouti, Abu Dhabi and transit the Suez Canal before arriving back in Monaco next May.
Domjan says that even if big ships never end up working entirely on solar power, the PlanetSolar experiment could result in tested technology that may be used in hybrid marine engines of the future.  “The technology is improving very rapidly, and is getting much cheaper. Someone has to be the first to show it works — that’s what we are doing,” he said.
The name TÛRANOR is derived from the “Lord of the Rings” by J.R.R. Tolkien and means both “the power of the sun” and "victory". Domjan- a former ambulance driver, mountain guide and rescue specialist- spent six years putting the project together before the voyage that commenced last year. PlanetSolar wants to show that current technologies aimed at improving energy efficiency are reliable and effective and to advance scientific research in the field of renewable energy.
“We want to show to the world what can be done, that modern solar technology has huge economic potential,” Mr. Domjan says. “The idea is to provide an impulse to the industry to consider alternatives, to think about innovative ways to reduce their energy needs.”
Solar panels are in wide use on boats already, but PlanetSolar is the first large scale experiment that relies completely on solar renewable energy.  The 30-metre catamaran, that cost $15 million to build, boasts of more than 5,300 square feet of solar panels on its top deck. Lithium-ion batteries store the sun's energy harnessed by this honeycomb of solar panels, allowing the Turanor to cruise even on cloudy days.
Although commercial shipping is experimenting with solar and wind energy, an exclusive use of a silent pollution-free means of propulsion for large ships is still a long way away. The recent recession and rising fuel prices have forced owners to examine other options, including wind kites. Research in hull and propeller design, alternative fuels and natural gas and waste-heat recovery systems has grown rapidly. The phenomenon of 'slow-steaming' has caught on. As Maersk's Tim Smith says, “If we slow a ship’s speed by 20 percent, from, say, 23 knots to about 19 knots, you can save up to 40 percent of the fuel cost.”
The awakening in the wider industry over environmental and fuel efficiency issues means that many in commercial shipping are following PlanetSolar's voyage with great interest. “People now are far more likely to look at anything — what will get economic payback over the life span of a ship, which can be 25 or 30 years,” Arthur Bowring of the Hong Kong Shipowners Association says. “The priorities have changed with the higher fuel price.”
He adds, commenting on the PlanetSolar project, “What they are doing is brilliant — it gets people to think.”
Posted by manu at 12:40