Sampa Arya says she threatened to kill herself to get justice for husband. 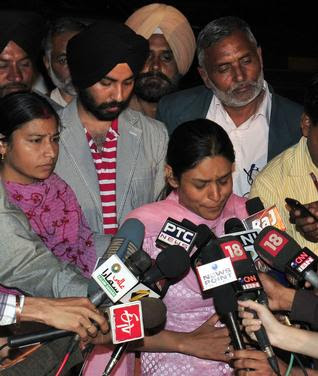 Sampa Arya, the wife of the hostage Third Officer Ravinder Singh of the MV Suez, has been questioned by police after she allegedly sent a ‘threat message’ to a member of leader Rahul Gandhi’s staff in early April. Sampa, a teacher with a three year old son, has been running from pillar to post for many months in Delhi trying to garner government support to rescue her husband from the clutches of Somali pirates. She has often been critical on television and otherwise of the Government’s response to her desperate plight.


Sampa Arya’s husband Ravinder Singh Gulia is one of the 22 crew aboard the MV Suez that was taken hostage by Somali pirates on August 2 last year. Red Sea Navigation, the Egyptian owners, have long declared inability to pay ransom and the crew is reported to be in dire straits.

Sampa started knocking on political doors in Delhi last year. In March this year, a visibly distressed Sampa had pleaded with Congress Leader Sonia Gandhi on behalf of the Indian hostages, telling reporters, “We have knocked on several doors, including that of the Prime Minister, but to no avail. We beg Sonia to get the government to help save our husbands, children and brothers from being killed.” Sampa had accused the government of indifference at the time, saying that their response was “shocking.”

The authorities say that Sampa sent a threat SMS this month from her hometown Rohtak to one of Rahul Gandhi’s aides, who then lodged a police complaint at the Tughlaq Road police station in Delhi. The cops traced the number, discovered it was hers and questioned her at length. Sampa was later released by the police who said that she was desperate to get justice for her husband and was “harmless.”

A senior police officer said, “A team was sent to Arya’s house and we interrogated her at length. We had received a complaint and we passed it on to our counterparts in Haryana. We did not find anything amiss after we questioned her.”

Sampa has confirmed the incident. The Indian Express quotes her as clarifying, “Since last year, I have been meeting all leaders, including the Prime Minister, but nothing has resulted from those meetings. I even went to Rahul Gandhi’s office. They were not ready to give me his phone number, but I overheard someone in his office dictating the number of his personal assistant. I noted it down and sent an SMS that I will kill myself if nothing is done.”

“While there was no news of my husband, police came to my house on April 15 and questioned me at length. They wanted to know how I got the number and why I sent the SMS,” she said.

“I told them that I will go to any length to get justice for my husband.”
.

Email ThisBlogThis!Share to TwitterShare to FacebookShare to Pinterest
Labels: piracy