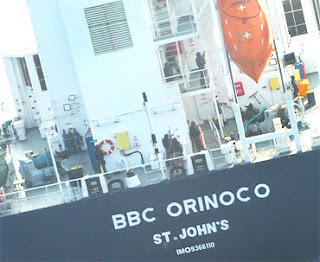 
In yet another alarming incident of a piracy attack close off the Indian coast, and less than two weeks after an assault on the ‘Starlight Venture’ off Mangalore, the Indian Navy has repelled boarders aboard the multipurpose ship ‘BBC Orinoco’ and rescued the crew. The incident is even more shocking because it occurred just 450 nautical miles off Mumbai, when the vessel was on a passage from Aqaba to Singapore.


About 6 am on Nov 11, the Orinoco- with a reported Filipino, Russian, Sri Lankan and Ukrainian crew of 14- informed the Indian Navy through UKMTO Dubai that pirates were attacking them. The Navy dispatched missile corvette INS Veer to intercept the distressed vessel. Another ship with Marine Commandos aboard, the INS Delhi was also pulled off exercises and diverted to the Orinoco; a long-range IL-38 aircraft was additionally deployed for aerial surveillance.

Early the next day, the commandos rappelled aboard the Orinoco from a Sea King helicopter that covered their descent. Although full details are unavailable at the time of writing this report, it is believed that the pirates were scared off the vessel by the naval action. The crew were rescued; a detailed search of the vessel found no pirates aboard, although tools such as crowbars- and knives -were found aboard.

The 2008 built 17335DWT Orinoco is registered in Antigua and Barbuda and is believed to be chartered by Beluga shipping and sub-chartered to Germany’s BBC. Manager Reedereigruppe Freese has confirmed that the crew are safe. “MV BBC Orinoco has successfully been prevented from being hijacked and is now safe,” the company said. “Thanks to the crew, the Indian Navy, as well as to UKMTO,” the statement concluded.

Beluga connected ships have been in the eye of the pirate storm before. On the 24th of last month, the Beluga Fortune suffered an almost identical incident off Somalia, with the crew locking itself in a ‘citadel’ before being rescued by the Royal Navy the following day. The ‘BBC Trinidad’, another Beluga vessel, was not so lucky two years ago, being taken in the Gulf of Aden towards the end of August before being quickly released by the middle of September.

Critics allege that many owners still push Master’s to sail by the shortest possible route between the Bab-el-Mandab straits eastwards with no protection. With piracy in the Arabian Sea off the Indian subcontinent now a well-established fact and with no armed guards aboard, these crews and owners are simply asking for trouble.

From an Indian standpoint, the by now many piracy attacks off the Indian coast and an incident where Somali pirates were caught in Lakshadweep in August after they had swum ashore, all point to dangerous holes in our maritime security. Observers say that these incidents have the security establishment rattled. Whether that is true or not, the fact is that India continues to ignore piracy and associated terror threats at its own peril. Although it can afford – cynically speaking - to ignore seafarers, it just cannot afford to be sanguine about threats from the sea any longer. As one mariner says, “Mumbai has already paid the price once.”
.