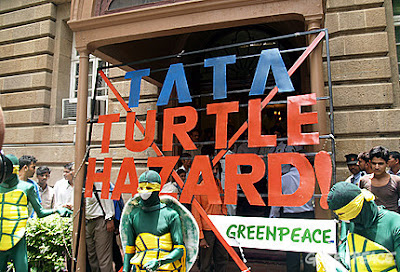 pic: Greenpeace
Environmental group Greenpeace has alleged that the Ministry of Environment and Forests is displaying double standards in Orissa: although it has stymied Vedanta’s mining activities in Niyamgiri in eastern Orissa, the Ministry is doing nothing to safeguard sensitive ecological areas against the joint Tata Steel/Larsen and Toubro Dhamra port project in the same state.

Greenpeace has been campaigning against the Dhamra project for more than five years now. The port is scheduled to begin operations at the end of the year, according to the Tatas. Greenpeace activist Ashish Fernandes now says, “The Government is selectively applying forest and environmental laws to corporations.”

Greenpeace is fighting the project because it says that the port is too close to the breeding ground of the endangered Olive Ridley sea turtles, and another similar project is home to the saltwater crocodiles. In any case, says Greenpeace, the entire project is situated in ecologically sensitive wildlife areas and should be stopped. It says that government released documents clearly show that the port is in violation of the Forest Conservation act; it says it has documents from the Orissa authorities to prove this, quoting a report by Mr JK Tewari of the Environmental Ministry’s eastern office as saying, "It is clear that Dhamra Port project site was never developed as a Port and is a part of the protected forest under the Kanika Protected Forest [Orissa]."

A 2009 Supreme Court ruling had referred the entire matter to a committee, which agreed with the Government’s stand that no laws had been violated. The government had submitted to the Supreme Court an affidavit saying that the project is not built on forest land, something that Greenpeace aggressively disputes.

The website of the Dhamra Port claims that the port area is “30 kms away from nesting area by sea and 15 kms as the crow flies”, and that findings show that it is sufficiently away from the limits of both the Gahirmatha Sanctuary and National Marine Sanctuary. Critics say that Greenpeace wants to compare the Vedanta mining episode with the Dhamra project in order to give fresh impetus to their protests. It also hopes to get Environmental Minister Jairam Ramesh to react to the allegations.

Meanwhile, the first phase of the port is nearly complete. Nevertheless, Greenpeace hopes that the Environmental Ministry will stall the port development now. "For years, we have had this 'fait accompli' situation in which big companies would simply create huge constructions in violation of environmental laws and later pay a small penalty to regularise it. Vedanta was the first case where the minister broke with this tradition. But we are not sure why the same yardstick is not being used against the Dhamra project. If you can shut down Vedanta project for building without getting forest clearance, you should be able to punish Dhamra as well," says Fernandes.

"It is a matter of fairness, if you are applying one law for Vedanta, you must apply the same to other groups also."
.