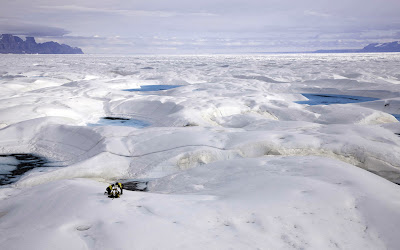 It is the biggest Arctic “ice island” formed in half a century. Covering about 250 square kilometres, it is four times the size of Manhattan and half as big as the Island of Montreal. It has broken away this month from the Petermann Glacier in Northwest Greenland, the northernmost glacier in the world; the broken island is about a quarter of the parent glacier’s size.


Discovered by scientist Trudy Wohlleben from Environment Canada, the massive chunk of ice is expected to move south towards the Baffin Island and Newfoundland shipping lanes off the coast of Canada. University of Delaware scientist Andreas Muenchow says that the ice island’s thickness is more than 200 metres in some places, “half the height of the Empire State Building.”

Two years ago, a much smaller 29 sq km ice island had broken off from the same glacier, causing concern about shipping routes near Baffin Island; fortunately, that broke into smaller pieces before it could form a threat. The present one is much bigger, and was in fact predicted by scientists after they saw that a large crack had developed in the 70 km long Petermann Glacier. 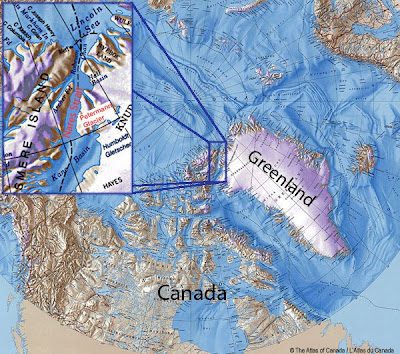 The size of this ice island is indeed staggering. “The fresh water stored in this ice island could keep the Delaware or Hudson rivers flowing for more than two years,” Muenchow said. “It could also keep all U.S. public tap water flowing for 120 days.”

“In Nares Strait, the ice island will encounter real islands that are all much smaller in size,” he added. “The newly-born ice island may become land-fast, block the channel, or it may break into smaller pieces as it is propelled south by the prevailing ocean currents. From there, it will likely follow along the coasts of Baffin Island and Labrador, to reach the Atlantic within the next two years.”

An ice island larger than the present one was last seen in 1962, when a 400 sq km piece of the Ward Hunt Ice Shelf broke away from Ellesmere Island. More recently, many Arctic ice shelves have been found broken up. Two years ago, the Ellesmere Island lost about 200 square kilometers of ice shelves, causing experts to say that global warming and other irreversible effects were in play.

The Canadian Ice Service has been on alert for possible threats to ships and oil exploration activity. The year 2005 saw a 66-square-kilometre part of the Ayles Ice Shelf headed towards the busy Beaufort Sea; it fortunately went down a dead end channel without threatening shipping lanes.

So, where will this one eventually go? Scientists say that chances are that the majority of the ice island will remain inside its fjord and ice up during the annual freeze up. However, many smaller icebergs are likely to break off from it; some will likely move into the Nares Strait and from there be carried along into the northern part of Baffin Bay, where they may well threaten shipping and oil exploration activity in future.
.