Sailing again on old trade routes: ‘The Jewel of Muscat” 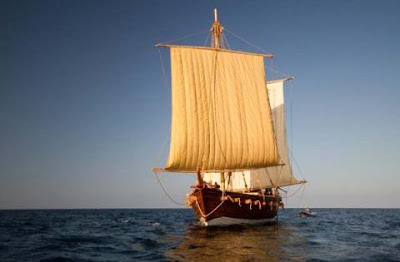 The ‘Jewel of Muscat’, an 18 metre long hand faithful replica of a 9th century Arab sailing ship, will travel ancient routes across the Indian Ocean from Muscat to Singapore via India later this month. Displacing just 55 tonnes, she will replicate voyages Arab navigators undertook eons ago. Like them, she will do this under wind power alone, and with old instruments for navigation.

The hull of the Jewel of Muscat has nearly 32,000 stitching holes; over 100 kilometers of hand laid rope was used to sew the hull planks together as was the fashion in the good old days. She has no engine and the crew will navigate traditionally using the sun and the stars and the ‘kamal’, a strange instrument that looks like a piece of wood with a cord attached; Arab navigators used to tie knots on the cord at known ports, placed so that Polaris could be sighted along the instrument and so latitudes calculated. In this way, they sailed down Latitudes to reach ports.


The Jewel of Muscat is officially a collaborative project between the governments of Singapore and Oman, but is actually an an international endeavour. Experts from India, Australia, Italy, Oman and the US worked together to produce the ship; ten professional carpenters and eleven ropeworkers from India were involved. The crew will be mainly Omani. On her first leg, she will sail for about a month from Muscat to Cochin, where she will undergo a full hull inspection after being hauled out of the water. Her next leg of the voyage, to Galle in Sri Lanka, will take two weeks; another four weeks to Penang and then onto Malacca in Malaysia and thence to Singapore to end her voyage. The ship will be handed over to Singapore as a gift from the Omanis, after which she will probably be converted into a museum to mark a bygone and romantic era.


The Jewel of Muscat project is almost two years old; started in June 2008,traditional wood was sourced from across the world before the keel was laid in October 21, 2008. The project was set up under the auspices of the Ministry of Foreign Affairs and is the reconstruction of a 9th century western Indian Ocean ship, using as its blueprint the ‘Belitung’ wreck that was found off Indonesia in 1988 carrying over 60,000 pieces of Chinese ceramics, silver and gold artefacts, spices and other commodities.: the ‘Tang treasure.” The project thereafter became a means of deepening ties between Oman and Singapore, besides giving Omanis a glimpse into their national heritage. Using ancient techniques, "Jewel" was hand stitched using coconut fibres; no nails have been used. Layers of goat fat mixed with lime seal the wood and prevent ingress of water. Her timber planks come from Ghana, her sails from Zanzibar palm leaves, and her masts are made from Poona teak trees.


Saleh Said al Jabri, an instructor with Oman Sail, was selected last year to be the Captain of Jewel of Muscat for her voyage to Singapore. “This project is of utmost importance to Oman and bringing our maritime history to life. I am honoured to be selected as the Captain of Jewel of Muscat and nothing will make me prouder than steering her along the old trading routes from Muscat to Singapore via India and Malaysia, just as our forefathers did before us.We have tried to think back a thousand years." Jabri and his 16 man crew will live in tough and spartan conditions, eating the same food as their forefathers did: dried fish and dates.
.

Email ThisBlogThis!Share to TwitterShare to FacebookShare to Pinterest
Labels: Jewel of Muscat