Teenage girl she will be youngest to sail around the world despite collision: 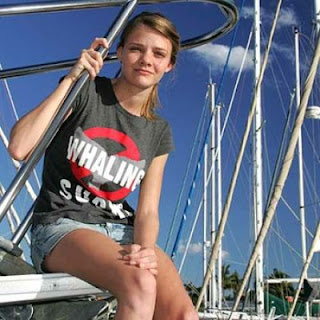 Sixteen year old Australian schoolgirl Jessica Watson, whose yacht, ‘Ella’s Pink Lady’ collided with the cargo ship ‘Silver Yang’ in a busy area off the southern Queensland coast, remains undeterred, saying that she remained confident of becoming the youngest person to sail solo around the world. Jessica sailed out from Mooloolaba on Queensland's Sunshine Coast on a ten day preliminary journey to Sydney in her boat. Near disaster struck soon thereafter: her yacht crashed into the bulk carrier 15 nautical miles east of North Stradbroke Island's Point Lookout when she was below decks. Speaking to reporters after she was escorted back to the Gold Coast, she said she was tired but upbeat: "The whole incident gives me confidence that I can actually handle this," she said. "It could have happened to anyone. I'm unlucky, I suppose, but you also learn from it," she added. Damage to the yacht may involve repairs to the vessel’s rigging and a small section of the hull. The Australian Transport Safety Bureau is conducting a full investigation of the incident. In a press release back on land, Jessica said she was ‘still in high spirits and acknowledges the ongoing support of her family, friends and sponsors who are all solidly behind her record breaking bid to become the youngest person to circumnavigate the world.’